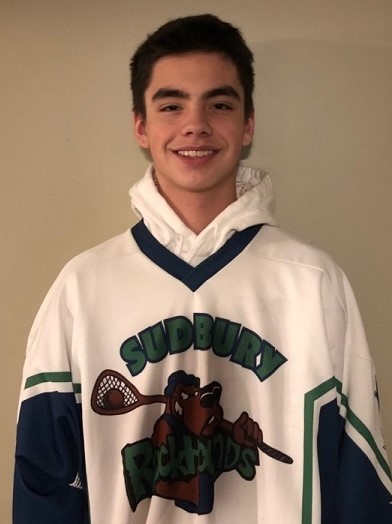 With equal parts blessing of natural instincts for the game, combined with a passion and willingness to work at the sport of lacrosse, Ashton Eadie was head and shoulders the most talented Sudbury Rockhounds player in his age group, arguably in their entire stable of competitive teams, last summer.

Given the fact that the 14 year old grade nine student at Lasalle Secondary School is not a particularly imposing physical presence - "I'm kind of scrawny, I'm not going to lie" - his innate sense of the game has served him well in a box lacrosse setting that is far more constrained than the outdoor field lacrosse variety.

"In my opinion, it's not really something that you can develop, it's just something you have," said Eadie. "It's in your head. You just have a little more vision than some other people. To me, it's just common sense, it just comes easier to me."

"I kind of see the play before it happens, if that makes sense."

Introduced to both hockey and lacrosse while still only two to three years old, Eadie quickly migrated to his sport of choice. "They are a little bit the same, but the fundamentals in lacrosse are a lot different," he stated.

"In my opinion, lacrosse is a lot faster pace. You can't hold on to the ball, or you're going to get killed. I like that about it."

Yet for as much as the ability to remain elusive on the floor is key, there is little doubt that stick skills, particularly when it comes to both ball handling and shooting, are at the pinnacle of the skills pyramid in lacrosse.

"It kind of came naturally to me, but as I got older, I really started to work on it," said Eadie. "My granddad (Wayne II) used to tell me to play wall ball with your opposite hand to get good at it. If I get forced one way, I need to be able to be good with my left hand also."

For those who crave ideas, the internet can provide a wonderful sample to be worked into your repertoire. "I learned moves from You Tube videos, I watched NLL (National Lacrosse League) videos, Toronto Rock games, stuff like that."

"Sometimes, you learn new moves, new fakes. I remember this summer, I was playing against our rep goalie and I couldn't score against him. I was watching You Tube, learned a new move and scored quite a bit more."

"I tend to get fancy, sometimes, a little ahead of myself. But you need to be creative, to sell your fakes."

Still, Eadie knows that if he is to have any chance of moving to the next level, he will need to play with, and against, better competition, all while expanding the scope of his skill-set.

"My shooting, definitely, has to be more accurate," said the young man who is contemplating spending a summer in the Kitchener-Waterloo region. "As you get older, the goalies get bigger and you need to pick your spots a lot better."

In a sport that requires a certain fearlessness, at an elite level, Eadie does not shy away from mixing it up. "With it being a bit rough and all of that stuff, it's just part of the game, it's what you signed up for," he said.

"I don't mind getting hit, it's just part of the sport."

Yet if success is to come his way, Ashton Eadie will have to forge his future based, in large part, on his wizardry with the ball. "I feel like I play a pretty unique style," he said. "I'm pretty fast on my feet, just really creative with my stuff."

"And my defensive IQ is key, knowing where to be," he added. "Throughout the game, you get to know who their players are, what kind of players they are, to have that ability to jump passes."

In Sudbury, right now, his is a lacrosse resume that very few can match.