Local lacrosse goalie who played for Gretzky now back at home 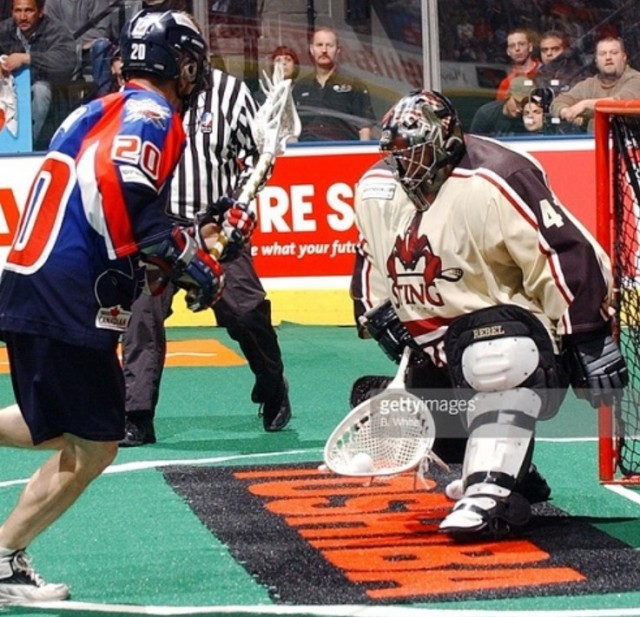 Mike Miron was first introduced to the sport of lacrosse at the age of seventeen.

With some background in hockey as a goaltender, he would be convinced by some high school chums to help out their summer house league team in Whitby, stepping in to finish off a season between the triangular pipes.

Five games in, Miron had yet to be scored upon. Just over three years later, he would be selected 17th overall in the first round of the National Lacrosse League draft by the Columbus Landsharks, an amazing ascension in the sport.

The ensuing seven years as a professional athlete would cap off a whirlwind decade for the native of Capreol, providing a litany of incredible memories for the son of a railway man, who has now come full circle.

Spending the first ten years of his life living thirty minutes north of Sudbury, Miron and a twin brother, both blessed with well above average size, were raised in something of a sport setting.

"We were big kids, right from the start, and that still hasn't changed," said Miron, who moved back to northern Ontario in 2010. "We were athletic kids, kind of the athletic big kids. We weren't great at every sport, but we were able to compete in pretty much any sport."

The sometimes nomadic life of a railway family was certainly no different for the Miron clan, moving initially to Sarnia when Mike was but ten years old, and then subsequently on to Whitby, three years later, starting the lacrosse ball rolling - quite fortuitously, it would seem.

"My parents never enrolled me in lacrosse, this was just kind of a fluke thing," said Miron, alluding to his debut in his latter years of high school. "The first time I went out there, I honestly had no idea about the game. They showed me how to put the equipment on, and I knew that the objective was to stop the ball."

"I won't lie - being a bigger kid, I obviously took up more of the net, so that was a benefit."

Turns out the kid was a natural - well, at least in part, a natural.

"I could stop the ball and my footwork was sort of similar to hockey, and my hand-eye coordination was always solid - I could track the ball well - but I absolutely could not throw a ball," stated Miron.

That would not deter the Clarington Green Gaels, a junior "B" team in the area, from inviting this absolute neophyte to lacrosse out to join their team, the competitive season following up the recreational campaign every summer in the various hotbeds of lacrosse across Ontario.

Reluctantly, Miron would accept the offer, in large part due to the urging of his father, who convinced the young man to be as straightforward and honest as possible in his discussions with the team.

"He said to tell them that you can stop a ball, but you can't throw it - but you are willing to put in the work," recalled Miron. Dad knew the resolve that lie within his son. "I don't like not being able to do something - failure is not something I am into."

"The coaches were very impressed with my ball-stopping ability, and they figured they could make me a passer. I look back at it now and that next year and a half really got me to the NLL. I stayed an hour late, after practice, three times a week and they had me throw the ball until I got it."

By the end of that season, it was Miron who beat out the 21-year-old veteran goaltending incumbent for the starts in post-season play. A year later, on the heels of a second season with the Gaels, the netminding prodigy would join the Whitby Warriors Jr A team for a successful playoff run that would see the crew capture the Minto Cup as national champions.

Still, he was only starting to understand the potential pathway that remained ahead. "I didn't get pushed as a kid," he said. "You look at all the kids in hockey who get told that there's all of these opportunities. I really had no idea."

Perhaps this mindset was essential to the overall appreciation that Miron would have for his career in professional lacrosse. Make no mistake, the NLL and NHL bear very little resemblance.

"They call themselves weekend warriors," said Miron. "Everybody has their regular jobs, and they play on the weekend." The Columbus franchise, however, had a different plan in store for their young prospect. "They were looking for someone to live in Columbus and become the face of the franchise, so they employed me to work in the office (as well as play for the team)."

"I was 21 years old, doing high school visits, getting together with kids with cancer, taking them to the Blue Jackets' games. This was a real experience for me."

After two years in Columbus, Miron would be traded to the Arizona Sting, leading the league in saves and playing in the 2005 NLL all-star game. Despite losing to the Toronto Rock in the league final, the gregarious Canadian would make a home in Phoenix, tackling many of the same responsibilities that he held in Ohio.

"The organization built this huge blow-up shooting gallery for kids with my likeness on it," reminisced Miron, with a chuckle. "We took that out and introduced lacrosse in the communities around Phoenix." The Sting were owned, in part, by Wayne Gretzky, with the local man somewhat in awe, attending a gala to celebrate the opening of the new arena in Glendale.

Miron would share the table with a group that included Gretzky, supermodel Cindy Crawford, basketball great Steve Nash, musician Kenny G, and others. "He (Gretzky) treated us just like the NHL guys, to be honest with you," said Miron. "It was outstanding what they did for us, during my time there."

A knee injury would ultimately lead to the late-blooming goaltender calling it a career, after one final season in Rochester in 2007. Thankfully, Miron had not strayed all that far from his roots. "When we lived in Whitby, I worked a winter with CN," he said. "My plan, after I was done playing, was always to end up back in the Sudbury area."

Balancing a very busy work schedule, Miron had offered some assistance to the Greater Sudbury Lacrosse Association (GSLA) since his return home. This year, however, he had planned to jump in with both feet, coaching a midget rep Rockhounds team that included his stepson, Mason, also a goalie.

"There is no doubt that there are talented kids here," said Miron.

It just might take a little while longer to uncover them.